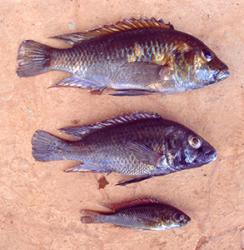 Three species of cichlid fish are evolving from a single ancestral form in Lake Massoko in Tanzania.Charles Darwin called it the mystery of mysteries: how do new species arise? We understand a lot more now than we did in Darwin’s time, of course. But only with the advent of cheap large-scale DNA sequencing have we had a hope to understand how the process works at the most fundamental level.

Professor George Turner from Bangor University's School of Biological Sciences has been awarded a £250k grant from the Leverhulme Trust to study fishes from a tiny lake formed in a volcanic crater in Tanzania.

Over the past 40,000 years or so, a small fish that normally lives in shallow pools and rivers margins has been adapting to live in a lake that is over 40m deep. Alongside fish that still resemble their pond-living ancestors, two new forms have evolved that differ in size, diet, habitat preferences, colour, body shape and in the shape of their jaws and teeth. One is a dwarf form that feeds in the open water. The males of the large deep-water bottom-living variety are blue, probably because the yellow-brown colour of the shallow water form wouldn’t be visible in deep water.

Full genome sequences will be obtained for 200 fish, representing all three forms, and the genetic differences will be related to differences in anatomy, behaviour and ecology. This study will be carried out in parallel with tests of the behaviour of the fish in Bangor University’s research aquarium: lighting will be manipulated to mimic deep-water and shallow-water conditions for tests of mating and feeding behaviour. 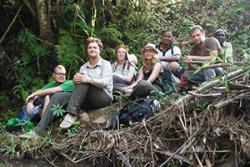 Taking a break during sample collection.The study is being carried out with help and advice from colleagues at Bristol, Cambridge and Edinburgh Universities, the Wellcome Trust Sanger Institute and the Tanzanian Fisheries Research Institute, and also involves contributions from 2 Bangor University postgraduate and 12 (so far!) undergraduate students, who have helped collect samples in the field and are performing key studies in the lab under the supervision of Prof Turner and postdoctoral researcher Dr Alexandra Tyers.