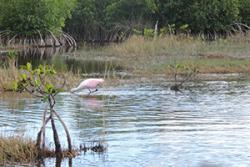 Mangroves store huge amounts of carbon in their soils.The release of dangerous amounts of greenhouse gases from mangrove swamps could be halted, claim scientists.

A team of researchers, led by Bangor University, say they have the potential to stop climate-changing amounts of gases, such as carbon dioxide, from leaving tropical mangroves if they are damaged or cut-down.

Currently mangroves, which are unique forests found along the coast around the equator, store huge amounts of carbon in their soils.

It's feared that deforestation and climate change may damage these fragile ecosystems causing the release of this carbon - much of it as carbon dioxide, a well-known greenhouse gas.

In a rare collaboration, two of the world's leading wetland scientists joined forces to look at the problem - Prof Chris Freeman, from Bangor University and Prof Bill Mitsch, from Florida Gulf Coast University.

The researchers were by Saraswati, an international student from India on Bangor University’s unique Wetland Science and Conservation MSc degree run by Dr Christian Dunn. 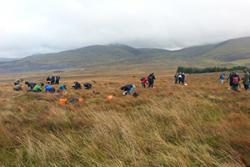 Knowing this will now allow the scientists to transfer decades of knowledge on the soils of these well-studied habitats to mangroves.

Crucially this involves aspects of bio-geoengineering - modifying our landscapes and ecosystems to capture and store more carbon in a bid to fight climate change.

Explaining the potential of their research, Prof Freeman said: "We've been experimenting with ways of increasing the amounts of carbon in wetland soils for a while now, but never mangroves”.

"Now we know the microbial activities and processes in mangrove soils are similar to those we've been looking at we can start working out ways to prevent the loss of carbon from those too”.

"This is vital because although mangroves are incredibly important stores of carbon they are constantly being damaged by human activities and our changing climate.”

"If the trees and plants are removed from a mangrove swamp, for whatever reason, it doesn't take long for the soil they were growing in to decompose - releasing greenhouse gases, such as carbon dioxide."

"However, if we could treat the soil - using some of our tested techniques - then we could prevent this loss and allow the regrowth of the mangrove trees; preventing millions of tonnes of carbon from being emitted to the atmosphere.”

"It's wonderful to think that the work we've been doing on the bogs of Snowdonia could affect the management of mangrove swamps in Florida and Indonesia - and it will certainly mean we'll be warmer during fieldwork," Prof Freeman added.

The team's findings have now been published and work will continue; both in the field at Florida and in the laboratories at Bangor University by Wetland Science and Conservation MSc students.