DNA analysis finds that type of grass pollen, not total count, could be important for allergy sufferers

This article by Simon Creer, Professor in Molecular Ecology and Georgina Brennan, Postdoctoral Research Officer, at the School on Natural Sciences is republished from The Conversation under a Creative Commons license. Read the original article.

As the winter cold is replaced by warmer temperatures, longer days and an explosion of botanical life, up to 400m people worldwide will develop allergic reactions to airborne pollen from trees, grasses and weeds. Symptoms will range from itchy eyes, congestion and sneezing, to the aggravation of asthma and an associated cost to society that runs into the billions. 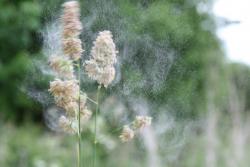 Pollen being released from a common grass species, Dactylis glomerata, also known as cock's-foot, orchard grass, or cat grass.Ever since the 1950s, countries around the world have been recording pollen counts to create forecasts for allergy sufferers. In the UK this forecast is provided by the Met Office in collaboration with the University of Worcester. To date, pollen forecasts have been based on counting the total number of grains of pollen in the air from trees, weeds and grass. The pollen is collected using air sampling machines that capture the particles on a slowly rotating sticky drum.

However, while these forecasts focus on the level of all pollens in the air, people suffer from allergic reactions to different types of pollen. Grass pollen, for example, is the most harmful aeroallergen – more people are allergic to grass pollen than any other airborne allergen. And now our own preliminary health data suggests that allergies to this pollen vary across the grass flowering season.

In an effort to improve the accuracy of pollen counts and forecasts, we have been working on a new project to distinguish between different types of grass pollen in the UK. The aim is to find out what species of pollen are present across Britain throughout the grass flowering season.

Microscopes are used to identify the pollen of many allergenic tree and weeds, but unfortunately this can’t be done for grass pollen, since all grass pollen grains look highly similar underneath a microscope. This means it is almost impossible to routinely distinguish the species of grass they come from using visual observation.

So, over the past few years, our research team, PollerGEN, has been investigating whether a new wave of approaches, including molecular genetics, can be used to identify different airborne grass pollens instead. One method that our team has employed to identify the pollen relies on using DNA sequencing to examine millions of short sections of DNA (also called barcode markers). These markers are unique to each species or genus of grass pollen.

This approach is called “metabarcoding” and it can be used to analyse DNA derived from mixed communities of organisms, as well as DNA from many different types of environmental sources (for example, soil, aquatic sources, honey and the air). It means that we can assess the biodiversity of hundreds to thousands of samples. In particular, it has allowed us to analyse pollen DNA collected by aerial samplers at 14 rooftop locations across Britain. 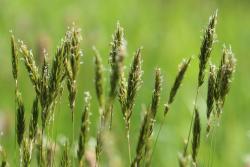 Sweet vernal grass (Anthoxanthum odoratum) is a short-lived perennial grass that is grown as a lawn grass and can also be found on unimproved pastures and meadows.By comparing the pollen we captured to samples in the UK plant DNA barcode library (an established reference DNA database of correctly identified grass species) we have been able to identify different types of grass pollen from complex mixtures of airborne pollen. This has allowed us to visualise how different types of grass pollen are distributed throughout Britain across the grass flowering season.

While there was a real chance that aerial pollen mixtures could be very varied and haphazard – due to the mobility of pollen in the environment and the fact that different grasses flower at different times of the season – our newly published study has found that this is not the case. We have found that the composition of airborne pollen resembles a seasonal progression of diversity, featuring early, then mid and late-season flowering grasses.

By combining other historical and contemporary data, we also found that as the grass flowering season progresses, airborne pollen follows a sensible, but delayed appearance from the first flowering times noted from the ground. This means that different types of grass pollen are not present throughout each period of the flowering season. They disappear from the environmental mixture.

This research is important to more than just our understanding of plants. Our own emerging evidence suggests that over-the-counter medications are not uniform throughout the grass flowering season. So certain types of grass pollen may be contributing more to allergenic disease than others. It could be that when symptoms are particularly bad, allergies are caused by the type of grass pollen in the air, not just the amount.

In the next few months, we will be looking into different forms of pollen and health data, to investigate links between the biodiversity of aerial pollen and allergenic symptoms. The overarching aim of our work is to eventually provide better forecasting, planning and prevention measures to enable less people to suffer from grass allergenic disease.