An iconic lake at the foot of Mount Snowdon has played a vital role in improving how lakes and rivers can be monitored in the future.

Llyn Padarn, viewed at the foot of Snowdon by thousands of visitors each year, was the testbed for research that could lead to far more efficient and speedy environmental monitoring of our lakes and rivers, following research by Bangor University and others, published in Nature Communications (coi10.1038/ncomms14087).

New biomonitoring methods use water samples to extract and identify DNA from microscopic fragments of plants and animals. The fragments, known as “environmental DNA” (eDNA) are present in both sea and freshwater environments and are offering environmentalists faster and more efficient means of both searching for and assessing numbers of particular species and assessing the range of species in an environment.

Environmental agencies and others charged with assessing and monitoring the health of waterways are increasingly interested in how to adopt this technology to both speed up the environmental monitoring processes and enable agencies to monitor more locations or more frequently. Agencies are working both with universities and with newly-emerging specialist DNA companies. Up until now, the method has primarily been used to look for certain species. 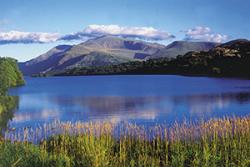 An iconic view of Snowdon, with Llyn Padarn in the foreground.Dr. Iliana Bista (former KESS PhD student), who led the research with Prof. Si Creer, Prof. Gary Carvalho and an international team based from Bangor University’s School of Biological Sciences explains:

“There has been great interest in this new technology, but up until now, no-one really knew for how long these DNA ’signatures’ lasted in real life lakes. Were we detecting creatures that were there or had been there- and if they had been there- how long ago? The challenge, which we have now resolved, was to establish for how long the DNA remains in the environment. Fortunately, the DNA signal showed normal seasonal variation, from Winter, to Summer, just like we observe in the real animal groups”.

Bringing their expertise to bear on this problem, the team, which included leading experts in environmental DNA and DNA barcoding, worked with partners from the Environment Agency and with support from Natural Resources Wales, to solve the problem.

The Bangor-based eDNA team monitored the lake using DNA and traditional methods over a full annual cycle and found both differences in the number of species according to the seasonal rise and fall in populations, and a close relationship between the DNA sampling and traditional taxonomic identification methods. The team have proven that DNA does not persist in natural freshwater bodies and that therefore, the eDNA method can be used to provide a reliable guide to the animals and insects found in any freshwater lake.

Doug Wilson Head of Research, Analysis and Evaluation at the Environment Agency said:

“This is really fantastic work. I am really excited to learn more about how we can gather data from eDNA to help make our ecological assessments more efficient. This is why we are working closely with the research community to develop these methods.”

Prof Creer and a team of researchers from Bangor, Cardiff and Birmingham universities and the Centre for Ecology and Hydrology, supported by a £1.25M NERC Highlight Topic Grant are now focussing on what happens to the eDNA signal as it travels downstream into river environments.

“Monitoring rivers for ecosystem health represents a huge investment of resources for stakeholder groups. We now aim to demonstrate how relevant the cost-effective and high-throughput eDNA method is to capture biodiversity at different spatial scales in moving water.”

The project was funded by the Environment Agency and Knowledge Economy Skills Scholarships (KESS) which is a pan-Wales higher-level skills initiative led by Bangor University on behalf of the HE sector in Wales. It is part funded by the Welsh Government’s European Social Fund (ESF) convergence programme for West Wales and the Valleys. The Padarn team additionally benefitted from funding from a Natural Environment Research Council, Biomolecular Analysis Facility (NBAF) pilot grant and The Freshwater Biological Association’s Gilson Le Cren Award 2014.