Do you know what’s in your fish fingers? It’s in the genes… 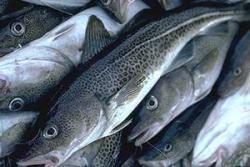 CodDNA detection tools are revolutionising the way that global fish stocks are being protected and identified.  It is now possible to identify a fish species at any point from the net to a breaded product in the freezer, and these tools are powerful enough to reveal where the fish was caught, or what group of fish it belonged to.

Fish are a key source of food to communities around the globe and are collectively amongst the most traded food commodities worldwide. However, a significant portion of fish stocks is fully or overexploited, illegal fishing remains a rampant problem, and aquaculture growth, while being needed, is often insufficient or unsustainable.

These new genetic-based approaches are beginning to play a key role in addressing these problems by revolutionising conservation and management of natural fish resources.

Leading scientists from 24 nations will be among delegates attending a major international symposium, supported by the Fisheries Society of the British Isles (FSBI), at Bangor University, Wales this week (18-22 July). Delegates at Fish, Genes and Genomes: Contributions to Ecology, Evolution and Management will discuss the value of these new fisheries tools based on DNA sequencing; so-called genomics, and sharing the latest advances in genomic approaches in fisheries and aquaculture.

These advances have provided new and effective opportunities to tackle major challenges in fisheries sustainability, management, conservation and governance.

Gary Carvalho, professor of Molecular Ecology at Bangor University and UK Convenor of the Symposium explains:

“While global marine fish stocks continues to be worth around US$80-US$85 billion annually, international bodies point out that many fisheries are already severely depleted or in sharp decline in nearly every part of the world. Threats such as climate change, overfishing and changes to habitats, together with an increased use of wild fish to support aquaculture, means that livelihoods in many coastal communities and food security worldwide are under threat.”

“With these new tools, we are able to identify whole fish populations, by their individual DNA signatures, similar to ethnic or geographic groups of humans, or to trace a fish product back to its population group. Such is the sensitivity of new genetic approaches that it is now even possible to take a bucket of water from our oceans, extract the DNA, and identify not only individual species, but a whole community, based on shedded skin or scales, and other biological materials released into the environment.

So-called environmental DNA, or simply “e-DNA” is a particularly exciting approach because it allows scientists to study parts of marine communities that provide food and shelter for many fish stocks, as well as rapid assessment of ecosystem health, which provides many services such as uptake of carbon dioxide, recycling of nutrients, and release of oxygen into the atmosphere.” 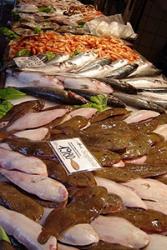 A traditional fish market stall.Consumers can now shop with greater confidence that the fish they buy is both correctly labelled and has been sourced responsibly.

Consumer assurance on the sustainability of their seafood is crucial to the Marine Stewardship Council (MSC). The blue MSC label is only applied to sustainable fish and seafood products that can be traced back to fisheries that meet the MSC’s strict criteria for sustainability. Throughout the supply chain, businesses must correctly identify, separate MSC certified from non-certified product, and have a traceability system in order to be awarded with the MSC Chain of Custody certification. Since 2009, the MSC has worked with independent laboratories to carry out DNA tests on hundreds of products from around the world as a complementary measure to protect MSC seafood integrity from possible species substitution and mislabelling. Most recently in 2015, a randomly collected sample of 257 MSC labelled retail products from 16 countries yielded only a single case of mislabelling. Overall, the mislabelling rate for MSC certified products has never exceeded 1%.

Jaco Barendse, MSC Product Integrity & Traceability Manager, who will be presenting at the Symposium, says:

“The use of molecular tools like DNA test adds an extra level of scrutiny to the MSC Chain of Custody Standard. In the foodservice industry where average mislabelling rates over 30% are common, we are pleased that DNA testing confirms the credibility of MSC labelled products. Ongoing research and development of DNA and related techniques are very important to the MSC to allow monitoring of product integrity in more countries, greater diversity of species and products”.

Low-cost catfish fillets sold as expensive sole fillets or cod caught in the North Sea but declared as originating from the Baltic Sea are both examples fraudulent activities in the fisheries sector.

Illegal fishing is estimated to be worth 10 billion euro per year worldwide. This criminal activity negatively affects the global economy, disrupts marine ecosystems, and damages fisheries communities and consumers. Without compliance with existing rules sustainable fisheries are impossible. Molecular technologies based on genetics and genomics can provide clear answers to questions such as "what species does this fish product come from….where was this fish caught….is it wild or farmed?" The ability to answer these questions are a major asset to traceability schemes as well as to fisheries control and enforcement. A major challenge though is to transfer such innovative technologies into routine practice to support the fight against fisheries fraud and make sure consumers get what they pay for and know what they are eating.

This is ideally accomplished by referring to such technologies in policy and legal frameworks.

“It is noteworthy that the Control Regulation (EC) 1224/2009 for the Common Fisheries Policy (CFP) of the European Union refers in Article 13 explicitly to genetic analysis to support traceability. The proposal to refer to genetics in the CFP Control Regulation goes back to an exemplary cooperation and dialogue between the European Commission, stakeholders and scientists, also from Bangor University. Meanwhile examples where DNA analysis supports fisheries management including control and enforcement in Europe are accumulating and undoubtedly the FSBI symposium will make a major contribution to further enhance an efficient technology transfer.”

Scientists are now able to move beyond species identification and assess from where in the ocean fish came from.  This is important for managing populations of fish in local regions, rather than the species as a whole.  For example, by tracing cod back to their spawning grounds it is possible to tell whether fish came from the Baltic Sea, North Sea or Iceland; an issue affecting fisheries sustainability and fishing rights.

More recently, the same techniques are starting to be applied to tracing fish escapees from aquaculture in a European project called 'Aquatrace'.

"The use of fish DNA profiling to tell if an individual is from the wild, or from a fish farm, can help us to understand the scale of aquaculture escapees and assess their impact on natural populations. Aquatrace is using genomic analysis of sea bream, sea bass, turbot, salmon and brown trout to evaluate the risk of escapees and provide DNA tools for identifying them."

Rapid assessment of population size using genetics methods is being tested for shark and ray species for direct input into policy decisions. It is estimated that up to a quarter of the species group are under threat worldwide.  With a lack of historical data and assessments challenging for small scale and recently established fisheries, e-DNA monitoring is providing an effective solution.

The method has been used to estimate the leopard shark (Stegastoma fasciatum) population in eastern Australia and has proved accurate against conventional methods, the same being found for white sharks (Carcharias carchardon) in South Africa. Jenny Ovenden of the University of Queensland, Australia, a speaker at the Symposium, is using genetic estimates for assessment of the status of sandbar (Carcharhinus plumbeus) and dusky (C. obscurus) shark fishery in eastern Australia as well as to assist with the conservation of manta rays (Manta alfredi) in the Australasian region.