How does the crab shed its shell? 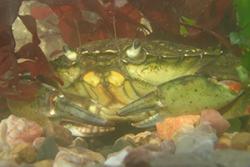 A Green Shore Crab.Anglers everywhere would probably agree that, in season, there’s no better bait than freshly moulted crab. During the moulting season, nothing else works as successfully, as fish are in a frenzy for the ‘delicacy’ of a soft crab. But we’re unlikely to see a crab losing its shell as we walk along our shoreline.

BBC Springwatch viewers will be able to see what happens as a common green shore crab moults its shell in the programme at 8 pm on 3rd June.

This is believed to be the first time that a crab moult has been filmed for broadcast.

The Springwatch crew caught the sequence on camera with assistance from experts at the University’s College of Natural Sciences, as one of a series of rock-pool life pieces filmed at Bangor University.

For the crab-moult scene, the crew were advised by Professor Simon Webster, an expert on crab behaviour. 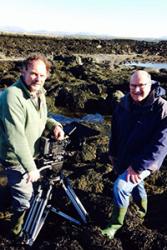 Cameraman Richard Kirby filming in Trearddur Bay with advice from Professor Chris Richardson of the School of Ocean Sciences.Prof Webster of the University’s School of Biological Sciences explains: “The moulting itself often takes place at night, a few hours after an initial crack appears at the back of the crab shell. The crab then has to drink copiously to swell up and force the shell apart along the crack. The crab that emerges is soft and slimy, and though the new shell hardens over the coming days and weeks, it is vulnerable to being eaten by fish for the first few days. The crabs have a different smell during the process and fish such as bass can be seen hunting them out in the early morning, as they’re drawn in to the shallows by the scent.”

Prof Webster describes the shell’s texture as going from the slimy, when the crab first emerges from its shell, to feeling like paper, thin card and then cardboard, before finally hardening within 3-4 weeks. The whole process is remarkable considering that the crab’s muscles have to detach from the shell before moulting, leaving the crab barely able to move before the moult takes place and for a few days after the event.

Altogether, BBC researcher Kristina Turner from the BBC and cameraman Richard Kirby spent 10 days filming the trials and tribulations of life in rock pools in an aquarium at the University’s School of Ocean Sciences.  Research Officer Dr Nick Jones also provided advice to the team and sourced and maintained a wide range of typical rock pool marine organisms that were subsequently filmed going about their daily life in an aquarium “rock pool set”, while Prof Chris Richardson also  advised during location on Anglesey’s Trearddur Bay.