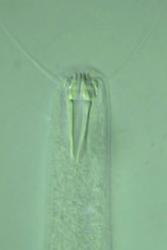 One of a variety of the highly diverse marine nematode worms at 100x magnification.Little is known about the microscopic organisms living in our oceans that make the basis of the food chain which ultimately, support enigmatic creatures such as sharks and dolphins. The majority of these microscopic animals remain unidentified, but an international team of researchers including scientists from Bangor University have revealed that those inhabiting European beaches inhabit particular ecological niches, much as larger plants and animals do.

The research also revealed that communities that are more distant from each other are made up of increasingly different species potentially in their millions.

“Because microscopic species are very small and are present in their billions, there is considerable debate about whether or not they show any geographical (and ecological) species ranges, as do larger animals. In fact our work shows that  within these communities, some species are local, preferring a particular set of environmental conditions, while others are distributed far more widely ” explained Vera Fonseca, a Bangor PhD graduate, currently at  the Zoological Research Museum Alexander Koenig in Bonn and lead author of the paper in the early online edition of Global Ecology and Biogeography. 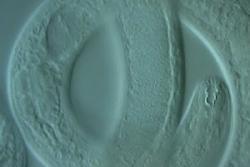 Another nematode worm at 100x magnification. “Understanding the geographical patterns of microbial life is important, since a warming world and an increasingly acidic marine environment will force species migrations and unknown ecological interactions in the important communities performing marine nutrient cycling, just as in larger animal and plant terrestrial and marine communities. Whether or not these ecological disturbances will cause changes in marine sediment ecosystem function will be played out as our environment changes over the next 50 years,” he adds.

The paper, published in Global Ecology and Biogeography, can now be read online (http://onlinelibrary.wiley.com/doi/10.1111/geb.12223/pdf).