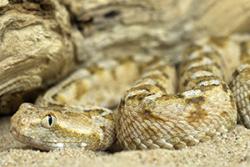 The painted saw-scaled viper (Echis coloratus) one of the species used in the research.New research, which disproves the theory that venom evolved just once in reptiles, could also lead to new medical treatments to counteract snakebite.

The “Toxicofera hypothesis”, which proposed that venom evolved and that the majority of reptile species alive today descended from a common venomous ancestor was first put forward nearly a decade ago. At the time this was a radical proposition, as traditionally venom was believed to have multiple origins. Whilst the Toxicofera hypothesis has become widely accepted, it had never actually been tested, until now.

Researchers in the School of Biological Sciences at Bangor University used cutting-edge DNA sequencing technology to study gene expression in the venom and salivary glands, as well as several other body tissues from a range of venomous and non-venomous reptiles to test the robustness of the Toxicofera hypothesis.

Writing in December issue of the journal Toxicon (doi:10.1016/j.toxicon.2014.10.004), Bangor PhD student Adam Hargreaves and his supervisor Dr. John Mulley, together with colleagues at the Wellcome Trust Sanger Institute and the Institute of Biological, Environmental and Rural Sciences at Aberystwyth University, found that the Toxicofera hypothesis is not supported by these new data, prompting a return to the traditional hypothesis that venom evolved at least  twice in reptiles. 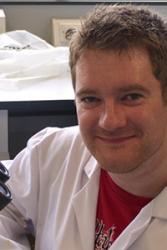 Adam Hargreaves at work in the lab at the School of Biological Sciences.“We are very interested in the evolution of venom, which everyone thought had evolved only a single time early on in reptile evolution”, explains Adam Hargreaves. “However, when we started looking at the data, we found no evidence to back this up. Instead it looks like many genes used in support of the Toxicofera hypothesis are normal maintenance or “housekeeping” genes, and not toxins. Taking that into account, the inevitable conclusion is that venom has evolved more than once in reptiles, and that previous studies were overreaching in their claims.”

This has profound implications for how the evolution of venom is understood, and also for the design of new medical treatments to counteract snakebite.

Dr. John Mulley explains: “Ruling out so many of the proposed toxins as actual components of venom means that snake venom is far simpler than was previously suggested, with the majority of venom complexity limited to just a few gene families. It seems likely therefore that we can develop more effective antivenom treatments which focus on combatting the effects of just these families. More fundamentally, this new research demonstrates the power of advanced DNA sequencing technologies to shed new light on old questions, and to overturn established hypotheses regarding the evolution of venom in reptiles.”