Not so sexy salmon 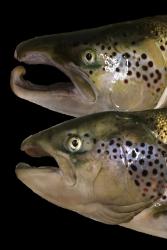 Two mature male Atlantic salmon showing the variation in kype length between individuals New research reveals that farmed salmon have smaller ‘jaw hooks’ or ‘kype’- a secondary sexual trait, likened to the antlers of a stag, making them less attractive to females than their wild salmon cousins.

This new finding published in the peer–reviewed science journal Royal Society Open Science, implies that farm-bred salmon are less sexually attractive than their wild brethren, and that despite only being bred in captivity since the 1970’s, within some 12 generations, that they are already diverging from wild salmon.

The findings form part of a wider research project into the differences between wild, farmed and hybrid salmon.

“Farmed Atlantic salmon do sometimes escape from the nets and can interbreed with wild salmon, creating hybrids.

“Initially, the fact that any escaped salmon are less ‘attractive’ because of their smaller ‘kype’ may seem like good news, as they’re less likely to breed. That’s not the whole story however.  Because farmed fish do not have to compete for mates, there is no element of sexual selection happening, making the farmed and hybrid fish poorly adapted to breeding in the wild. So, when you do see high levels of farmed escapees, and inevitable interbreeding within a wild salmon population, this could  reduce the long term health of that  population.

Farmed or hybrid salmon are not only less likely to breed successfully in the wild, they are also less likely to return from the ocean to freshwater rivers to spawn.” 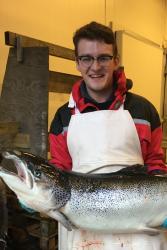 William holds a four year old mature male Atlantic salmon during the final round of sampling at the Institute of Marine Research’s fish rearing facility at Matre, Norway. “Identifying that this secondary sexual trait is less pronounced in farmed salmon is another sign that as a diverging species, farmed fish are less well adapted, and are less able to compete than wild salmon. A pattern that may be repeating in many other aquaculture species”

“This is the first study to look at the effect of domestication and hybridisation on sexually selected traits in salmon. Our findings demonstrate that when animals are kept in unnatural conditions, such as in a fish farm, rapid evolutionary change can take place, that can affect future reproduction and survival, after just 12 generations. Such changes are of special concern when hundreds of thousands of farmed fish can escape into the wild, and potentially interbreed, with wild relatives. .

Williams’s PhD is funded by the NERC ENVISION Doctoral training programme which is preparing the next generation of environmental scientists. He is working with the Institute of Marine Research in Bergen Norway. William gained a first degree and a Masters degree from Bristol University and was attracted to Bangor University by the opportunity to work with leading fisheries geneticist Prof Gary Carvalho.

Will, who is 24, works closely with the Norwegian Institute of Marine Research making regular trips to Bergen, Hordaland which is twinned with his home city of Cardiff.