An international team of scientists studying the migratory biology of bar-headed geese (Anser indicus), during their high altitude flights across the Tibetan plateau and Himalayan Mountains, have revealed how these birds cope with flying in the relatively low-density mountain atmosphere.

Dr. Charles Bishop of Bangor University's School of Biological Sciences led the study, along with colleagues Robin Spivey and Dr. Lucy Hawkes (now at University of Exeter), Professor Pat Butler from the University of Birmingham, Dr. Nyambayar Batbayar (Wildlife Science and Conservation Center of Mongolia) Dr. Graham Scott (McMaster University) and an international team from Canada, Australia, Germany and the USA. The study used custom-designed data loggers to monitor pressure-derived altitude, body accelerations and heart rate of geese during their southern migration from their breeding grounds in Mongolia to their wintering grounds in South-eastern Tibet or India.

Historically, it was commonly assumed that bar-headed geese would fly to high altitudes relatively easily and then remain there during their flights, possibly benefitting from a tailwind. Instead, the new study (published in Science 16th January 2015) shows that the geese perform a sort of roller coaster ride through the mountains, essentially tracking the underlying terrain even if this means repeatedly shedding hard-won altitude only to have to regain height later in the same or subsequent flight.

Why do they do this? 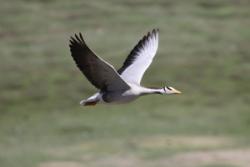 Bar-headed geese perform a sort of roller coaster ride to cross the Tibetan plateau and Himalayas.: image credit Nyambayar BatbayarThe birds adopt this roller coaster strategy as flying at progressively higher altitudes becomes more difficult, as the decreasing air density reduces the bird’s ability to produce the lift and thrust required to maintain flight. The birds also face the problem of reduced oxygen availability as the atmospheric pressure falls from 100% at sea level (with oxygen content of 21%), to around 50% at 5500 m (equivalent to 10.5% oxygen at sea level) and near 33% at the top of Mt. Everest (equivalent to 7% oxygen at sea level).

“We have developed two independent models to estimate changes in the energy expenditure of birds during flight”, said Robin Spivey (the Research Officer on the project and developer of the data logging equipment). “One based on changes in heart rate and one based on the vertical movements of the bird’s body. These indicate that, as even horizontal flapping flight is relatively expensive at higher altitudes, it is generally more efficient to reduce the overall costs of flying by seeking higher-density air at lower altitudes.”

The team was surprised to find that, very occasionally, bar-headed geese were flying in relatively strong updrafts of air. “During these moments, it seems likely that the bar-headed geese are flying on the windward side of a valley wall”, said Prof. Pat Butler. “This would give them the best opportunity to obtaining assistance from wind that is deflected upwards by the ground (known as orographic lift), thus, providing additional rates of ascent with either a reduction in their energetic costs or at least no increase.”

The new study showed that the wingbeat frequency of bar-headed geese gradually increased with altitude and reduced air density but was very precisely regulated during each flight and with a typical variation of only 0.6 flaps per second. Remarkably, heart rate was very highly correlated with wingbeat frequency but there is a very steep exponential relationship. For example, a small change in wingbeat frequency of +5% would result in a large elevation in heart rate of 19% and a massive 41% increase in estimated flight power.

Dr. Charles Bishop said: “It seems that geese must keep very fine control over their wingbeat cycles. As they flap faster they also move the wing further, i.e. with bigger amplitude. They are designed with a very high gearing linkage between the movement of the wing and the cardiac output or flow of blood from the heart. It is like riding a bike with an increasingly large cog for the pedals as you move faster and a relatively small cog on the back wheel. An increasing effort is required to move the bike pedal (or the bird’s wing) at the same frequency, or even slightly faster, through each revolution but the back wheel (or the bird’s heart) is rapidly increasing its activity and overall speed is increasing.” 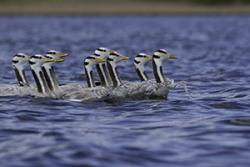 Bar-headed geese gather to feed and rest before their epic migration.: image credit: Bruce MoffatWhile previous studies show that these birds may be capable of flying over 7000 m, 98% of observations show them flying below 6,000 m. Dr. Lucy Hawkes said: “Our highest single records were of birds flying briefly at 7290 m and 6540 m and 7 of the highest 8 occurred during the night. Interestingly, flying at night means that the air is colder and denser and, again, would reduce the cost of flight compared to the daytime. ”

By utilising a roller coaster flight strategy, along with the occasional benefits of orographic lift and flying at night, these birds can minimize the overall energetic cost of their migrations and adopt a risk averse strategy. “Bar-headed geese are heavier than most other bird species, yet their average heart rate for the journey from Mongolia to India was only 328 beats per minute,” said Dr. Nyambayar Batbayar, “compared to values of around 450 bpm recorded in wind tunnels or on rare occasions in the wild. Bar-headed geese have found a way to cross the world’s highest land massif while remaining well within their physiological capabilities.”

How is this possible? “The physiology of bar-headed geese has evolved in a number of ways to extract oxygen from the thin air at high altitudes”, said Dr. Graham Scott. “As a result, they are able to accomplish something that is impossible for most other birds.”