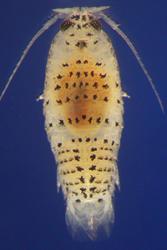 Writing in the journal Current Biology, researchers from Aberystwyth, Bangor, Cambridge and Leicester Universities have confirmed the existence for the first time of a distinct and independent circatidal body clock that follows the 12.4 hour cycle of the tide.

All organisms from simple bacteria to humans have the ability to tell the time using so-called body clocks.

On land and in the air the body clocks of humans, as with most land-dwelling organisms, are synchronized by the light and dark cycles – the circadian cycle.

This is the reason why people experience jet-lag when travelling over several time-zones; their internal clocks are out of kilter with the day/night cycle of the new destination.

However, in the sea, and particularly on the shore, organisms are challenged not only by 24 hour light cycles but also by other regular changes in the environment, the most noticeable of which are the tides that occur every 12.4 hours.

It has long been argued that a tidal (12.4 hour) body clock could be a simple effect of two circadian (ca. 24hour) clocks running in out of phase with each other, but rigorous mechanistic experimental proof for the existence of a separate tidal clock, (which was actually proposed more than 50 years ago, by a previous Head of the School of Ocean Sciences, Professor Ernest Naylor), has been lacking.

The researchers have been studying the behaviour of the speckled sea louse, examples of which were collected from a beach near Bangor in north Wales.

A marine cousin of the wood-louse, the speckled sea louse is commonly found on sandy beaches along the coasts of western Europe.

Measuring up to 5mm in length, it burrows deep into the sand when the tide goes out and returns to the surface to swim and feed when the tide comes in.

During the day it turns dark in colour to protect itself from UV light. At night it turns white and swims far more vigorously.

By using genetic, pharmacological and in vitro cell biology techniques and providing continuous light under laboratory conditions, the researchers were able to switch off the circadian clock.

Despite this, and being removed from its natural environment, the speckled sea louse continued to swim every 12.4 hours for many days.

This, the researchers argue, provides incontrovertible evidence that the speckled sea louse possesses two separate and independent body clocks, the circadian which follows the night and day cycle, and the tidal clock which runs on a 12.4 hour cycle.

One of the authors involved in this study, Prof. Simon Webster, who is at the School of Biological Sciences remarked. “The results from this project were particularly pleasing for me, and one of the other authors, Dr Michal Hastings, who is now a Group Leader at the MRC Laboratory of Molecular Biology in Cambridge. We were Professor Naylor’s PhD students at Liverpool University, Port Erin Marine Labs. in the late 70’s, where we were inspired to work on tidal clocks and crustacean physiology by Ernest! Our findings have now answered a long-standing problem in chronobiology, but as with all exciting science, leads to many more questions”

The paper, Dissociation of Circadian and Circatidal Timekeeping in Marine Crustacean Eurydice pulchra is published in Current Biology http://www.cell.com/current-biology/.

The work was primarily supported by grants from the Biotechnology and Biological Sciences Research Council (BBSRC).