Painless venom: Indian kraits (Bungarus caeruleus) are notorious for biting sleeping people at night. While highly lethal, the bites are so painless that they are often dismissed as trivial until it is too late. This indicates no defensive function.: Copyright and credit : Wolfgang Wüster It is estimated that every year, over 100,000 human deaths can be attributed to snakebite from the world’s 700 venomous snake species – all inflicted in self-defence when the snakes feel threatened by encroaching humans. However, a new piece of research concludes that snake venom did not evolve as a defence mechanism.

“We know that snake venom is used primarily for foraging; for overpowering and killing prey. However, we also know that snakes use their venom in self-defence - that's why so many people get bitten, and sometimes killed, by venomous snakes worldwide.  We wanted to investigate whether defence was a driver in venom evolution.”

A new paper published in Toxins reveals that surprisingly few venomous snake bites cause immediate pain, implying that the venom make-up has not evolved for a defensive primary purpose.

Bangor University student Harry Ward-Smith tested this hypothesis under Dr Wüster’s supervision. He gathered online survey responses from reptile keepers, herpetologists and fieldworkers, as part of his undergraduate degree in Zoology with Herpetology. 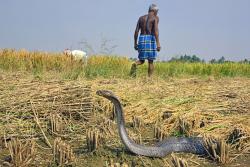 Many snakes, like this Indian cobra (Naja naja) will use their venoms in self-defence, causing millions of bites every year. However, did their venoms evolve for this function? This new study suggests that it did not.: Copyright and credit : Wolfgang Wüster

His survey, which gained nearly 400 responses world-wide, asked people working with snakes about the time-course of pain after bites they had sustained.

The results of around 600 experiences revealed that only a minority of bites and species regularly cause rapid, severe pain. Moreover, where early pain evolves during snake evolution, it is likely to be lost again in descendant lineages.

Dr Kevin Arbuckle, Senior Lecturer in Biosciences (Evolutionary Biology) at Swansea University’s Department of Biosciences and a co-author of the paper commented:

"Our results suggest little evidence for widespread evolution of venoms driven by their use in defence, though interesting exceptions likely exist such as the defensive use of venom 'spitting' in some cobras, and these specific cases deserve further study."

“Even though we might have expected defending your life to be more important than feeding, it turns out that natural selection for diet does seem to be the main driver of venom evolution in snakes” 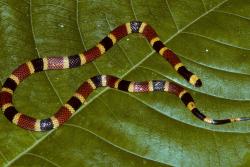 Defensive venom? Some coral snakes (Micrurus) have specifically pain-inducing toxins in their venoms, suggesting that natural selection for defence may have played a role in their evolution - a possible exception to the rule uncovered in this study.: Copyright and credit : Wolfgang Wüster Harry Ward-Smith said:

“I’m proud to be in the minority of scientists who published their undergraduate work, writing this up took a lot of work even after graduating.

I hope studies like this start to encourage further research into the function and natural ecology of snake venom, particularly rear-fanged venomous snakes which we still know so little about.”

Harry Ward-Smith 24 from Wimbledon, London chose to study Masters in Zoology with Herpetology at Bangor University because it is the only degree in the UK which specialised in herpetology. He added that a bonus of studying at Bangor was that much of the UK’s best white-water kayaking was within striking distance in Snowdonia.

Since graduating Harry has radio-tracked the Green Cat Snake within the Sakaerat Biosphere Reserve, Thailand and taught at further education in the UK. He is now considering further research opportunities, quite possibly a PhD in the near future.