The impact of climate change on marmot survival differs between seasons

Many animals have evolved life cycles and strategies (patterns of survival and reproduction) in line with predictable seasonal variation in environmental conditions. Short and mild summers produce bursts of vegetation and food, the perfect time to give birth to young. Long, harsh winters when food is scarce have shaped animals to largely depend on fat reserves for energy, and in extreme cases, to hibernate or migrate.

However, climate change is altering these seasonal conditions to which many species are adapted. Temperatures are increasing, winter snowfall is declining, snow is melting earlier, summers are extending, and the frequency of extreme events (e.g., droughts, floods) are on the rise. 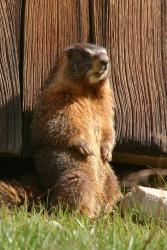 © Arpat Ozguk new study published in the Proceedings of the National Academy of Sciences USA (July 6 2020) found that marmot survival is affected differently by climate change during summer and winter seasons (https://www.pnas.org/cgi/doi/10.1073/pnas.1918584117).

The research, carried out in and around the Rocky Mountain Biological Laboratory in Colorado, analysed 40 years of life-history data to understand how yellow-bellied marmots (large burrowing ground squirrels) have responded to climate change during their active summer season and the long winter hibernation.

Dr. Line Cordes, lead author from the School of Ocean Science at Bangor University, said:
“Yellow-bellied marmots are a key indicator species for disentangling the seasonal impacts of climate change as they have a very distinct seasonal life history. They are found in western North America where climate change is more evident than anywhere else on the continent (with exception of the Arctic). Although they are a large rodent (reaching up to 6.5 kg), they are too small to remain active during winter and therefore hibernate for approximately 8 months. Marmots depend on energy stores acquired over the summer, and particular conditions to remain in deep torpor, which lowers energetic costs. Despite hibernation being an effective survival strategy in harsh environments, marmots can still lose up to 40% of their body weight.”

Over the course of four decades (1979-2018), marmot survival generally increased during summer but decreased during winter, and these effects were greatest among pups and one-year-olds.

Line Cordes trapping marmots: © Graeme ShannonClimate change at the study site has resulted in warmer winters with less snowfall, and warmer, drier summers which have become significantly longer in duration. Despite the similar seasonal survival trends across pups, one-year-olds and adults, the environmental factors driving these trends differed between the age-classes and seasons. For example, pup summer survival was higher following winters with reduced snowfall, possibly as mothers of these pups were in better condition during pregnancy and while caring for the pups as forage plants appeared sooner due to an earlier snow melt. Winter survival was lower following long, dry summers, most likely as pups were in poorer condition going into hibernation.

Dr. Arpat Ozgul, senior author of the study from the Department of Evolutionary Biology and Environmental Studies at the University of Zurich, said: “The effects of climate change on the fate of a population are determined by the complex interactions of individuals with their biological and physical environment. Our study shows that we need to characterize these complex interactions accurately in order to predict the ultimate effect of climate change on the fate of a population. Critically our findings highlight the care that should be taken in drawing conclusions from annual survival responses to climate change, as this may be a misinterpretation, simplification or even underestimation of the actual more complex responses that can differ dramatically across different times of the year.” 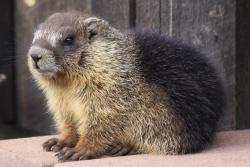 A marmot pup: © Graeme ShannonUntil now climate change has affected marmot survival positively during the summer months while leaving marmots more vulnerable during winter hibernation. Overall, the net change in survival was negative for pups, positive for yearlings, while there was no change for adults. It is important to note that continued climate change may change the patterns we observed in summer survival, as the persistence of forage plants would ultimately be impacted by progressively warmer and drier summers. Indeed, no marmot population is found in persistently warm and dry habitats.

The fact that climate change may benefit certain species during one season while resulting in unfavorable conditions during another season has potentially wide-ranging consequences across other species occupying temperate to more extreme habitats, such as deserts, mountains and polar regions, where the most rapid changes in climate are being observed. For wildlife living near the poles or near mountain tops, like marmots, there is nowhere to go when environmental conditions become less suitable.

Dr. Line Cordes added: “Social, burrowing, herbivorous mammals, like marmots, play an important role in ecosystem function as they help shape important habitats, and serve as prey for many predators. The loss or decline of these species would likely have wider reaching implications for biodiversity of montane habitats.”