Uncoupling the link between snake venom and prey 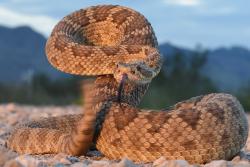 A Mojave rattlesnake prepares to strike.: image credit & copyright: Wolfgang Wüster What was fast-becoming received wisdom among herpetologists, namely that snake venom composition normally reflects the variety of their prey, has been disproved in one common species of North American rattlesnake.

Many recent studies had identified links between the type of prey and the type of venom that had evolved in venomous snake species world-wide. This was thought to reflect natural selection to optimise venom for different prey, and sometimes evolutionary ‘arms- races’ between snake and prey species.

New research by an international team led by Bangor scientists Dr Giulia Zancolli (now at the Swiss Institute of Bioinformatics) and Dr Wolfgang Wüster of the University's School of Natural Sciences, and published today in Proceedings of the Royal Society B, has disproved this assumption in the North American Mojave rattlesnake, Crotalus scutulatus, and has reopened the debate on what drives the evolution of diverse venoms in snakes.

While seeking to understand in greater depth the reasons behind this spectacular venom variation within this one common species, what the researchers found, or rather, did not find in this case, was the expected correlation between diet and snake venom types. Neither did they find a correlation between venom variety and the genetic divergence of different populations within the same species. 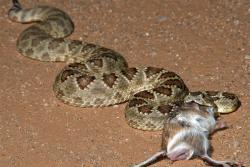 A Mojave rattlesnake eats its prey.: image credit & copyright: Wolfgang Wüster “We expected to find that the distribution of the different venom types would reflect what prey the snakes eat in different places. Instead, what we found was that the venom variation matched environmental factors such as climate and vegetation much more closely.” explains Dr Wolfgang Wüster of Bangor University’s School of Natural Sciences.

“The reason we study snake venom evolution is that animal venom systems provide us with a good model to better understand the forces at play within evolutionary adaptions. Clearly, the exact way in which natural selection acts on venom composition can be a lot subtler and more complex than is often assumed.”

Giulia Zancolli added: “What I found particularly fascinating is the way our study was able to bring to light how in nature there are barriers that impose strong selective pressures, but which are not obvious to our eyes. It is only with comprehensive sampling and looking at many different factors, like diet, genetics and environment at the same time that we can start to capture them”.