Why do snakes produce venom? Not for self-defence, study shows 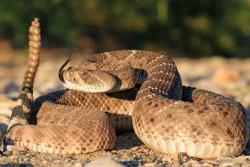 A western diamondback rattlesnake (Crotalus atrox) in a defensive stance.: Image copyright & credit Wolfgang WüsterSnake venoms vary a lot between species in their make-up and effects, which is a major problem for developing treatments. Snakes use these venoms for two main purposes. The first is foraging, where venom helps the snake to overpower its prey before eating it. The second is self-defence against potential predators – this is how millions of people get bitten, and around 100,000 killed, every year.

Many studies have shown that the need to capture and eat prey often drives the evolution of different snake venoms. For instance, many species have venoms that are especially lethal to their main prey species. On the other hand, scientists know surprisingly little about the role of natural selection for self-defence in the evolution of venoms.

If you have ever been stung by a bee, you will know that the sting hurts almost immediately, and the pain rapidly reaches its peak. And if you think a bee sting is no big deal, consider the consequences of being stung by a lionfish. Here, the intensity of pain is far more severe, but its rapid onset is the same.

This makes biological sense. The function of a defensive venom is to deter and repel a predatory attack before its bearer is killed or injured, and pain is a universal deterrent. If the evolution of snake venom was driven by natural selection for defence, we would expect to see the same pattern – almost immediate pain that is severe enough to be a deterrent. But is this what happens?

Krait bites are so painless that many victims don’t even realize they've been bitten until its too late.: Image copyright & credit Wolfgang WüsterThere is often severe pain in snakebites, but little was known about the timescale of pain development. If pain occurs long after the bite, it may simply be a side effect of other venom properties, such as tissue damage.

The ideal organism on which to test this idea is a species that is regularly exposed to venomous snakebites from a wide variety of snakes and can communicate precisely the effects of a bite. That model organism is Homo sapiens. In particular, snake keepers, reptile researchers and ecologists who work with them in the field.

To tap into the body of collective snakebite experience accumulated by this demographic, Bangor University researcher Harry Ward-Smith designed and distributed a questionnaire asking them about past venomous snakebites, and in particular, how pain developed after a bite.

Respondents were asked to report their pain level on a scale of 0-10 after one minute and five minutes, and the maximum pain level at any time after the bite. The purpose was to focus mostly on the timescale of pain development rather than the actual pain levels themselves. The rationale was that while the intensity of pain experienced will vary greatly between people, the timing of when pain develops should be more consistent. Different people may consider a bee sting to be a minor nuisance or unbearable, but everyone agrees that it hurts immediately.

The survey asked 368 people who had collectively received 584 bites from 192 different snake species. By far the most common experience involved relatively low pain levels after a bite within the first five minutes, when the pain might deter a predator in time for the snake to escape injury or death.

More severe pain often followed later. Fewer than 15% of cases resulted in pain that was debilitating within five minutes of the bite, and roughly 55% of cases never reached that level. These results strongly suggest that self-defence doesn’t drive the evolution of snake venom.

We also investigated the presence of venoms that caused early-onset pain throughout an evolutionary tree of snake species. We found that venoms which cause early pain evolved on several occasions, but were usually quickly lost again during the course of snake evolution. Again, this suggests that snakes don’t develop venom as a response to the need to ward off potential predators.

There are likely exceptions though. For instance, some coral snakes and pit vipers have specifically pain-inducing toxins in their venoms. Spitting cobras have unique behavioural adaptations for defensive venom use, and their venoms cause intense pain upon contact with eyes.

Those who feel personally threatened by the existence of dangerously venomous snakes can rest easy. Overall, it’s not aimed at us.