Cobras are among the most widely known venomous snakes, and yet a new research paper (ZOOTAXA 1 August 2018   http://dx.doi.org/10.11646/zootaxa.4455.1.3) has revealed that what was thought to be a single widespread cobra species, the forest cobra, is, in fact, made up of five separate species. Two of these species, the Black Forest Cobra and the West African Banded Cobra, are new to science and are first named in this paper. 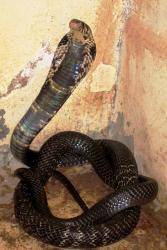 One of the newly discovered species is the Black forest cobra : Naja guineensis photo by L_Chirioes, who led the multinational team commented:

“Forest cobras are among the largest venomous snakes, reaching nearly three metres in length. They are widespread and common in many parts of Africa, and also commonly kept in zoos, research and private collections. The fact that such an iconic snake can contain five cryptic species hiding in plain sight shows how much more there is to be discovered about the natural world. Unfortunately, even as we are making these discoveries, individual species will be disappearing before we even know they exist.”

Before the new species were discovered, forest cobras were not considered threatened. But some of these newly recognised species are found in much smaller areas and may be far less common, and much more at risk from forest loss or even bush meat hunting.

“The findings raise more questions about their status and the steps which need to be taken to safeguard their conservation,” added Dr Wolfgang Wüster.

Historically, naturalists relied on the visible differences between specimens to identify different species, but all forest cobras are fairly similar in appearance. Although variations in pattern and the numbers of some scales had been noted, due to their similarities to even the trained eye, correct identification of the five new species would have been nigh on impossible before the advent of DNA techniques.

“Our first indication that forest cobras aren’t just a single species came when we sequenced the DNA of a few specimens that we thought were just different colour forms, and found enormous differences between them, far greater than between other cobra species”, said Wolfgang Wüster 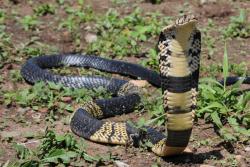 The suggested common name for the second newly identified cobra species is West African Banded Cobra: Naja savannula image J-F TrapeNicholas Casewell from the Liverpool School of Tropical Medicine said: “These findings also have important implications for the treatment of snakebite. We know that venom composition can vary among snake species, and the finding that this widespread, medically-important, snake species is in fact five distinct species, means that more work needs to be done to ensure that antivenoms used to treat forest cobra snakebites are in fact compatible with all of these species.”

Two Bangor University Masters students, Richard Storey and Cara Hall, worked on the molecular side of the project as part of their Masters degrees and are included as authors of the research paper. The list of authors also includes another ‘Bangor-bred’ herpetologist, Axel Barlow, now at the University of Postdam, Germany.