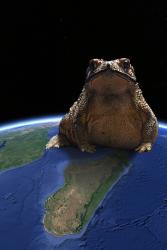 The Asian toad could wreak environmental damage in Madagascar: image copyright & credit: Dr. Wolfgang WüsterDespite knowing how damaging the introduced cane toad was to Australian native wildlife, it seems that we humans have done it again.

Unless swift control measures can be taken, a non-native toad is set to cause havoc in Madagascar, home of many unique species found only on the island.

Most likely an accidental ‘stow-away’, the Asian Toad  has already begun to spread rapidly and poses a  threat to the native wildlife, not because of what it eats, but because the toxins in its skin will poison whatever preys on the toad.

The animals that prey on the toad in its native Asia have evolved a small number of gene mutations enabling them to withstand these poisons. As Madagascar has no native toads, conservationists assumed that native Malagasy species would lack these resistance-conferring mutations, and any animal attempting to eat an Asian Toad will come to an unfortunate end.

A paper in Current Biology confirms conservationists’ worst fears. An international team of biologists from Bangor University, Liverpool School of Tropical Medicine, the University of Braunschweig and the Natural History Museums of Munich, Stuttgart and Turin, have confirmed that native Madagascan animals do indeed lack the mutations needed to withstand the toxin. Therefore, any Malagasy predator that ingests a toad is likely to be poisoned. 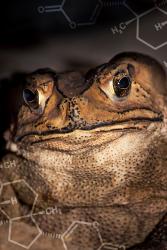 The Asian toad's native predators can withstand the toxins in its skin.: Image copyright & credit: Ben MarshallCo-author Andolalao Rakotoarison, co-chair of Madagascar's IUCN Amphibian Specialist Group said: “The arrival of invasive Asian toads and their potential impact came as a severe shock to the conservation community, and prompted this and other ongoing studies to assess their impact.”

Herpetologist Dr. Wolfgang Wüster, of Bangor University’s School of Biological Sciences, added: “There has been vigorous debate on the likely impact of the invasive toads and the lengths we should go to in our efforts to control or eradicate them. The fear is that the toads will send shockwaves through the entire ecosystem: the presence and spread of the Asian toads could threaten many endemic predators as they are poisoned by eating the toads, and in turn their prey, such as rodents, could increase in numbers.“

Bangor University Masters student Ben Marshall, who worked on this project for his degree, said:

“This is another example of how species introduced from one part of the world to another can disrupt natural ecosystems. Preventing the introduction of alien invasive species must be a top priority for biodiversity conservation, and should be a key consideration for all international transport of goods that could deliberately or inadvertently result in alien species getting established outside of their range.”

Nature conservation managers should seriously take into consideration a program of local control of toad populations, assuming that a full eradication from Madagascar is already impossible.