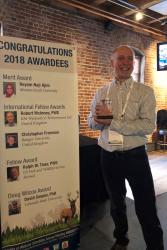 Prof Chris Freeman received his latest Award in Denver.A Bangor University lecturer has received a top international award for his work on understanding some of the world’s most important habitats.

Prof Chris Freeman from Bangor University was given the prize after receiving nominations from scientists around the world, who praised him as a leader in his field.

The Society of Wetland Scientists (SWS) awarded Prof Freeman his International Fellowship, at a special event in Denver, USA, in recognition for his pioneering work on wetland science.

Prof Freeman has been conducting research on the subject for over 20-years and has seen his work feature in the world’s top scientific journals and on the covers of national newspapers around the globe.

Some of his most influential discoveries have described how wetlands store climate-changing amounts of carbon and how they can be looked after to help safeguard our own future on the planet.

Speaking about the importance of Prof Freeman’s work at Bangor University, Dr Loretta Battaglia from SWS said: “There’s no doubt that Chris Freeman is a world-leading wetland scientist and it was a great pleasure to award him an International Fellowship.

“His work has really helped us understand what’s going on in our wetlands, and as they are some of the most important habitats we have, this development of knowledge is crucial for us to better manage and protect them in the future.”

Prof Freeman, who is the director of the Bangor Wetlands Group, said he was delighted to receive such an accolade: “It’s wonderful to receive such an award and it’s great to see that the work we’ve been doing at Bangor University is having such an impact on wetlands and conservation around the world.

“Wetlands really are such amazing places – they are the hub and focus for so much life on Earth, they can clean our water, protect our homes and even control the climate.”

“They are definitely the most fascinating places to study and we’ve still so much to learn about them,” he added.

Bangor University offers a range of degrees and modules which feature some of Prof Freeman’s work on wetlands, and the university prides itself in producing up-and-coming wetland scientists.