Research conducted by students at Bangor University, working with Friends of the Earth, has attracted global media attention.

Bangor University was commissioned by the environmental organization, to measure the amount of plastics and microplastics in British lakes and rivers- and what they found was widely reported in print and broadcast media across Britain and beyond.

Dr Christian Dunn, a lecturer at the University’s School of Natural Sciences, who led the research, explains:

“This was a really exciting project between the Bangor Wetlands Group at Bangor University and Friends of the Earth.

“But none of it would have happened without the efforts of a number of postgraduate students from the university.

“The students were instrumental in designing and conducting this entire project – it was a real team effort.

“Some of the students collected samples, and others worked on the analysis and method development.”

“It just shows how good our students are and the types of cutting-edge projects the students at Bangor University get involved in,” Dr Dunn added. 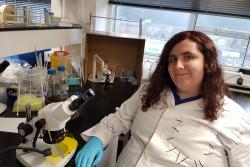 Luke FrearsLuke Frears, 22; from Belper, Derbyshire and Jedd Owens analysed all the water samples, filtering them and counting the microplastic particles in the samples for the report, they also demonstrated that using fluorescence during microscope analysis is an efficient way to visually identify microplastics.

Luke studied his first degree which lead to a Masters in Marine Zoology at Bangor University, and is now studying a Masters Research degree in Biological Sciences specialising in Wetland science.

Commenting on the media coverage of their work, he says:

“I was pretty dumbfounded and exhilarated, as we knew our research would be published and used for campaigns against micro plastics, but not that it would be this soon or on this wide a scale!”

He adds:
“I decided to attend Bangor after scuba diving around Anglesey with my late father Neil, and being captivated by the area’s natural beauty. Bangor was one of very few universities in the UK to offer the Masters in Marine Zoology degree, and out of all the open days I went to, Bangor impressed me the most.” 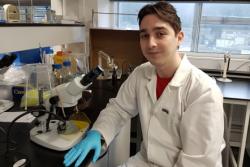 “I was caught quite off guard by how quickly the media began circulating news of our research, it felt surreal, though I am very thankful this was the case as I believe it is extremely important that the issue of microplastics be put in the spotlight if we’re to begin making attempts to combat the worrying results found.

“The results of the research were certainly troubling, with it suggesting the extent of microplastic pollution is far worse than we had originally believed. However it is my hope with our continued research, spreading of awareness, and the building of efforts to tackle the issue of micro plastics, we will be able to improve the state of our waters and limit further pollution.”

He explains further: “Luke and I are continuing to expand and further the project, both looking into other areas and devising a methodology to begin testing methods of treating micro plastic pollution.”

Jedd had a slightly unconventional reason for choosing to study at Bangor, he says:

“I chose to study at Bangor mainly due to my hearing my Grandad talk about how much he loved it here when he was evacuated to Bangor in World War II. Because of this I decided to check Bangor out for an open day and fell in love with the city the moment I was off the train.” 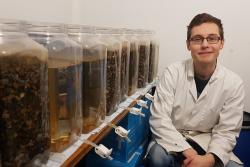 Dan Albergan Aberg, a 22 year old Masters student from Normanton, Derby was also involved in the research. Dan is researching removing pharmaceutical compounds from water using constructed treatment wetlands. For this study, he collected the samples from Cefni Reservoir on Anglesey.

He says: “I really enjoyed working with Jedd and Luke on their research as the methodology they’re to develop for identifying microplastics promises to have a wide impact on the UK with potential to be added as a new requirement in water quality surveys.

Of the media coverage, he says:

“The way it blew up was amazing. The fact it got featured in The Guardian and Independent was great as it showed that there is an interest in the research we are doing and helped in raising awareness of the serious issue that micro plastics pose.”

Dan studied for his BSc Zoology with Conservation degree at Bangor and stayed at the University for his Masters due to the great relationships he has with staff and fellow students as well as the high quality of the University’s research in wetland science.

Oliver ArmstrongOliver Armstrong, a 25 year old PhD student from Mold in Flintshire assisted with the  analysis. He used specialist Raman spectroscopy, a technique used for characterising metallic nanoparticles, to quantify exactly what types of microplastics the team had been finding in freshwater sources.

He’s been at Bangor throughout his studies, right through from undergraduate Chemistry, MSc Nanotechnology and Microfabrication in the School of Computer Sciences & Electronic Engineering and then back to Chemistry.

He says: “I've enjoyed the closeness and ease of getting around in Bangor, while receiving great lecturing and opportunities. Being nestled in between Snowdonia and the beaches of Anglesey has also had its perks.”

See some of the coverage here: